About 175 of us - friends and family from all chapters in Mitch's life gathered on Sunday, June 27, to share memories and celebrate his life.  It was wonderful with stories from his childhood, years as a drama student, his sports and baseball friends, skiing friends and family.  I know we missed notifying some people and I apologize.  I'm inserting links to photos taken by my sisters Susan and Cathy, as well as a life album.  Everyone can share and join us this way.  Hopefully, you can open at least some of them.  Love, Penny
Susan's Kodak album

Mitch's Life Album
Posted by Mitch at 9:55 AM No comments: 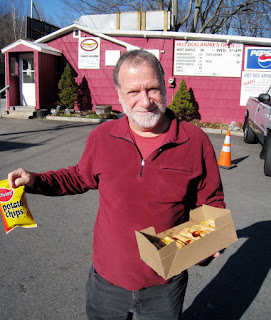 Here is a link to an entry "Rest in Peace Jerzy Snowman" on Martin Griff's Newark Star Ledger/Trenton Times (nj.com)  blog.  Thanks Martin.  I know how much Mitch enjoyed traveling with you.
Penny
Posted by Mitch at 6:47 AM No comments:

Peter Hines and NASJA (North American Snowsports Journalists Association) created this lovely "not-a-dry-eye-in-the-house" video to pay tribute to Mitch for his role in NASJA and his love of skiing and snow sports.  It's taken from the NASJA website.  Many thanks all!
Penny


Mitch Kaplan Memorial Video from Peter Hines on Vimeo.
Posted by Mitch at 5:54 AM 5 comments: 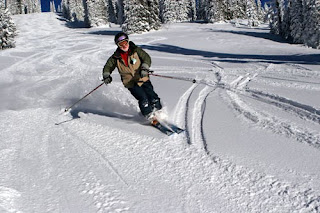 photo by Dino Vournas
Today the Bergen Record ran Mitch's obituary in place of his ski column which is very gratifying but it is a newspaper obituary and doesn't convey the depth of sadness, respect and support that we have received from all his famly, friends and colleagues.  Mitch gnashed his teeth many times over what was printed and what was not and I'm gnashing because they didn't give Dino Vournas the photo credit I requested for the picture of Mitch skiing at Brundage.  It's listed as a family photo, but perhaps that's somehow appropriate because the readers of this blog have become our family.  Your support and comments have been wonderful in this difficult time.
Posted by Mitch at 7:58 AM 3 comments:

Mitch never regained any ground with the ARDS (acute respiratory distress syndrome) and today his kidneys had started to shut down and his heart rate (slowed by drugs) was irregular. His lungs continued to hemorrage.  Transfusions and a battery of drugs caused no improvement. By late afternoon we decided that it was time to let him go. His condition was so deteriorated that we felt it was cruel to keep him alive artificially.

It was a very hard decision, but the right one. The nursing staff was wonderful helping us with the decision and through it. They made sure he was comfortable. And once the decision was made, the morphine drip started, and the breathing tube removed, it was only minutes until he let go. It was time.

Yes, there is no justice. But I could not bear to think of him having to undergo more chemo and more extended stays in the hospital. We will miss him terribly and he should have had many more years, but this is what is. Laina and Ish are with me, and Nardi and Mary have been incredibly supportive as have all our friends.

Keep him in your thoughts and honor him by doing the things he would have done had he more time.
Love from all of us
Penny, Laina, Ish and all the family
P.S.  There will be no funeral according to Mitch's wishes.  We will schedule a memorial at some time in the future.  If you'd like to do something, please make a donation to your favorite charity..
Posted by Mitch at 8:42 PM 16 comments:

Today Mitch's condition is more stable with heart rate down a bit and platelets and white cells up.  He is still totally sedated with a tube into his lungs for air and one to his stomach for food.  Laina and I were so pleased to see him looking better this morning.  But it is very hard to see him in this condition and totally out of it.  So by this evening we are anxious to get him off the tubes and back to us.  Hopefully that will be in the next couple of days and his breathing and health  will steadily improve.  And he'll start complaining mightily about all the poking and prodding he's gotten.
Posted by Mitch at 8:02 PM 7 comments:

Yesterday, as the day went on, Mitch experienced extremely high heart rates, low blood pressure and uncontrolled coughing on top of extreme fatigue. Doctors in the CCU (turns out he’s in CCU, rather than ICU – for us the same thing), took more x-rays and found the shadow on the right lung was progressing fast. With our consent they performed an endotracheal intubation – sedated him and inserted a breathing tube through his mouth down to his lungs. He will remain sedated while the tube delivering oxygen is in place. A broncoscopy was performed which showed that air cells in the right lung are hemorrhaging, but the pulmonologist said there was less damage than he thought there might be. I imagine he also took some tissue samples so he may have more diagnosis today (leukemic pneumonia, etc).

Gradually after the intubation the heart rate slowed and the blood pressure increased. It’s hard to say that Mitch is comfortable but he is constantly sedated through IV so he hopefully unaware of all that is going on. He is getting lots of antibiotics and blood products (platelets, whole blood). His platelet count yesterday was c. 10, so any procedure is extremely dangerous with the risk of bleeding.

Laina, Ish and I came home to our house about 10 p.m. and they slept here. I’ve just called the hospital now about 6:30 a.m. and the report is Mitch’s condition is stable. Heart rate is 114 (yesterday 160-170+), and blood pressure is 116/78. Oxygen level at 96%. Those figures are vastly improved over yesterday. This will a critical day as his body fights whatever infection is presenting, but we will keep you all informed. The CCU will not release information on his condition to anyone other than me so I will do my best to keep everyone in the loop.
Love, Penny, Mitch and Laina
Posted by Mitch at 7:21 AM 1 comment: 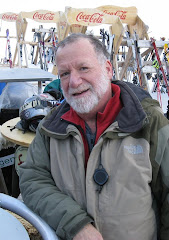 Mitch
A freelance writer with special interests in travel, skiing, golf and cultural travel, I've been writing for 20-plus years from my home in NJ. Contributor to the Kidz family of Web sites, including www.kidznsnow.com, and editor of newly-founded travel-for-boomers Web site www.graysatplay.com. Father of two adult children and husband to a wonderful woman with a real job and, thank goodness, great health insurance.